This is brilliant https://grandst.com/p/electricimp
Was this something you guys did?
I would love to mod one with my five year old?
Tried teaching her Scratch but it’s boring this would get her imping

That hack surprised us (in a good way) too! We had no idea they were doing it.

I love Grand St - this is the second cool imp-hack they’ve done (the imp’ed LED cube for their Twitter contest being the first). I’m excited to see what else they come up with!

We have hacked a HexBot before, I’ll see if we can’t get someone to post an Instructables for it!

Matt an Instructables for the HexBot would be great. I was planning an IoT day for kids early next year this would be just up their street. Along with propelling water, paint etc. at grown ups all controlled by imps

Hacking the spider itself is fairly tedious, but it does have one advantage. You don’t have to keep buying those expensive coin cells every time they go dead. I have a 150mAh Lipo in mine.

Ooh… I need to mount a dropcam on it…

Hey guys, glad you enjoyed our hack so much! The code can be found here on my github along with a link about how to solder the Hex Spider controller properly for usage with the Imp. @jwehr You can still attach a LiPo to the Hex Spider without the imp, in fact that may be a fun project on its own to make your Spider + Dropcam combo last a bit longer

Feel free to ping me with any questions/comments about how it works!

I added a LiPo and charger to mine with the Imp so I could just plug it in. 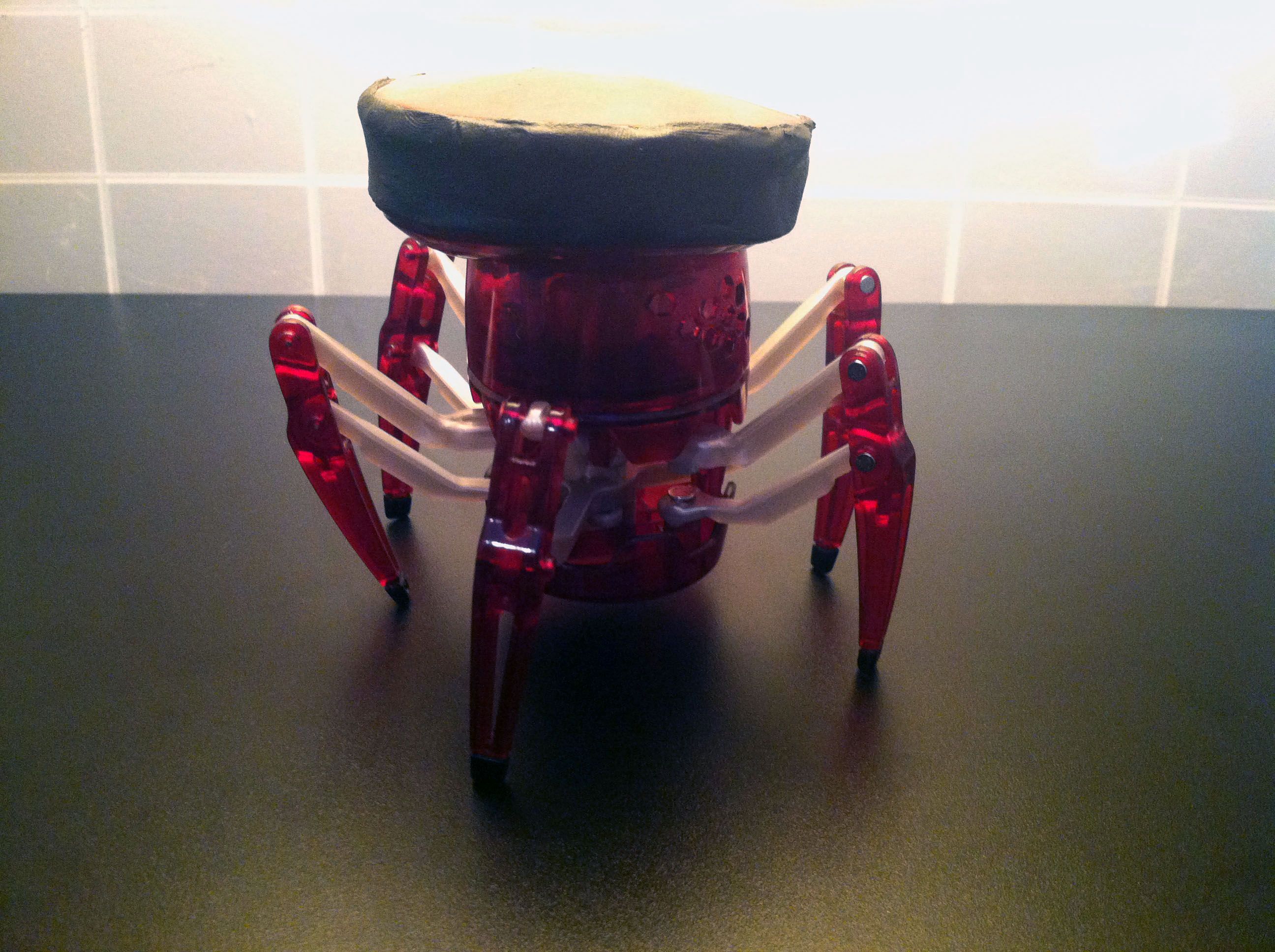 Dropcam might be a bit heavy… and it will need a large LiPo and a 5V boost. might not work.

Love the sugru casing! I built my own UNO based camera that takes shots intermittently and uploads them to an onboard SD card, could be a lighter and interesting solution.

I’d really like to be able to drive it around using just the camera, drone style. I think this little guy wouldn’t quite cut it though.

This however would work nicely. http://www.amazon.com/Combat-Creatures-Controllable-Disc-Firing-All-Terrain/dp/B009CK7WE6

Should I throw out an Imp challenge to see who can make the coolest Imp hack of that thing?

Must be bluetooth…they have an iOS and Android app to control it.

Hahaha, I saw that compared to the Hex Spider, that’s… Futurama references aside, I’m pretty busy at the moment getting Grand St. ready for the holidays (shameless plug to check out our website this Monday evening! :D) But afterwards let’s throw down gauntlets and do an Electric Imp Jam >:) I’ll even throw in some Grand St. credit to the coolest hack, assuming it’s not mine, hehehe…

Ninja Edit: It should be easy to get around the BT if it is, also the creator Jaimie Mantzel (same guy who made the Hex Spider) made this, and it shouldn’t be too hard getting in touch with him to see if it’s possible.

I like it! It is Jamie Mantzel. Should we run it through the month of Jan?

Here’s a crazy idea… after the contest we ship our Attacknids to a neutral location… say Electric Imp headquarters… if they were interested…and battle from remote locations…drone style.

Oh gosh I’m so down. @beardedinventor what say you? We start off 2014 with a second screencast from the Imp HQ?

Call it… Episode 2: The Drone Wars.

So, assuming it is all reasonably technically feasible, I’d say the minimum entry rules would be:

A live video stream will be set up for contestants to view the battle arena, but onboard video is also allowed.

No tampering with the “exploding” armor is allowed. It must come off as intended.

I nominate Hugo as contest judge…unless he decides to build one.

It looks like there is a how to hack in APC magazine for November… can’t find the article yet.

@jwehr I like the sound of this, Nimp wars: Ninja-imps. This could be the start of mini version of Robot Wars, Hugo and few other e.impers would remember this being on the telly in the UK.

Here is a black version exclusive to Brookstone. http://www.brookstone.com/app-attacknid-combat-creature?flag=search&question=attacknid&_requestid=12370522

It doesn’t look like there is any technical difference between the $70 version and the $130 versions.

FYI… ToysrUS has none of these in stores nationwide, though Target is stocking them…just none of my local ones. I think I’ll be ordering from an Amazon retailer.

I think the difference between the two versions is that the $130 one is controlled via app. The cheaper one has a RF/IR controller from what it seems

The Brookstone version appears to be entirely app controlled, but I don’t see any of the others that don’t have handheld controllers. The support video show pairing multiple 'nids with one controller.

Doesn’t seem like it will make a difference If I am going to hack it anyway.