It’s frustrating to have to change board footprints just to accommodate a supplier suddenly stopping production of a key part. The least that could have been done was to provide an interposer to help the transition between 002 and 003. It is things like this that make customers transition to other products that have a much friendlier dev experience, and also offer 3G products.
Is there a interposer board design for 002 to 003 designed in either Altium or Eagle? Or can they be purchased?

There is no direct interposer possible, because the pin muxes don’t overlap sufficiently to make this work for all applications - we did look at this. If it had been possible, we might have made such an interposer, but moving to a newer imp does generally pay off in terms of performance, cost savings, etc. All the new parts are made and sold directly by the manufacturer, which means better supply and pricing.

We have some altium files with the bare bones of an interposer - but not routed; if you like these then PM me. If you’re a commercial customer then contact us and we can help you transition, or find imp002 stock to keep you going until the natural successor to imp002, the imp004m, ships.

Bear in mind that the other company “with a much friendlier dev experience” abandoned their first product (admitting that no, it just doesn’t work reliably enough for commercial use because the wifi module they chose had a brain-dead TCP stack onboard), and keep changing/breaking APIs on their current products which causes their customers to come to us so they can actually ship something.

We provide something solid, reliable, and well supported to build upon, with over half a million commercial devices doing just that. As noted before, we were caught out by several large 002 orders which meant the EOL was rather more sudden than we’d like.

Thanks for the explanation Hugo. Will PM to get some more imp002s. Ideally we’d like to continue using Electric Imp products, as we have for the past 3 years.

EI can make a batch of imp002’s if it wants to - “something solid, reliable and well supported to build upon” goes way beyond the chip.

Technically yes, we could make more 002’s and if someone ordered 100k or more then it would be commercially feasible (though lead times may be a killer at this exact moment in time).

However, they’d still be more expensive than the imp003 and imp004m.

I’m stuck in a bit of a dilemma caused by the lack of imp002 modules. I’ve made eight copies of a design for in-house research use for my company and need to make between 16 and 20 more. Being an imp002 design I cannot pull the trigger and make more of these and my redesign options are a bit complicated - requiring antenna designs.

One somewhat radical option I have is to obtain imp002 breakout boards and de-solder the imp002 module and obviously re-solder into my design. I use leaded solder in my production but to desolder I need to reach lead-free temps.

Does anyone have advice or warning for me regarding this approach? how likely is it that an imp002 module will survive desolder in an oven and what can I do to improve the chances? thanks!

Desolder isn’t ideal, but there’s a good chance of them working.

We may have a small number of imp002’s about - it’s worth emailing sales@ and asking. I believe we have some imp002-c’s (external antenna only) which you can make into imp002-s’s by moving an 0402 component in the antenna path. Not great but probably better than desoldering whole modules, assuming you’re ok with 0402 rework.

003 isn’t too complex, as you can just copy our antenna - that’s the general idea.

0402 rework is indeed better than a risky de-solder operation. My next step is to evaluate the 003 design again because in that way I am moving forward if I can pull that off. If I recall correctly my initial objection had been the requirement for 4 layers and the increased cost of the pcb. On the other hand, for my really low quantity that delta is perhaps too small to be weighing on my mind.

So if you’re ok with 50 ohm by design (vs by test) Elecrow do pretty good, cheap, fast, PCBs. We use them a lot for quick protos. 4 layer there is cheap & stencils are too.

There’s always the option of buying onehorse’s breakout and using that? 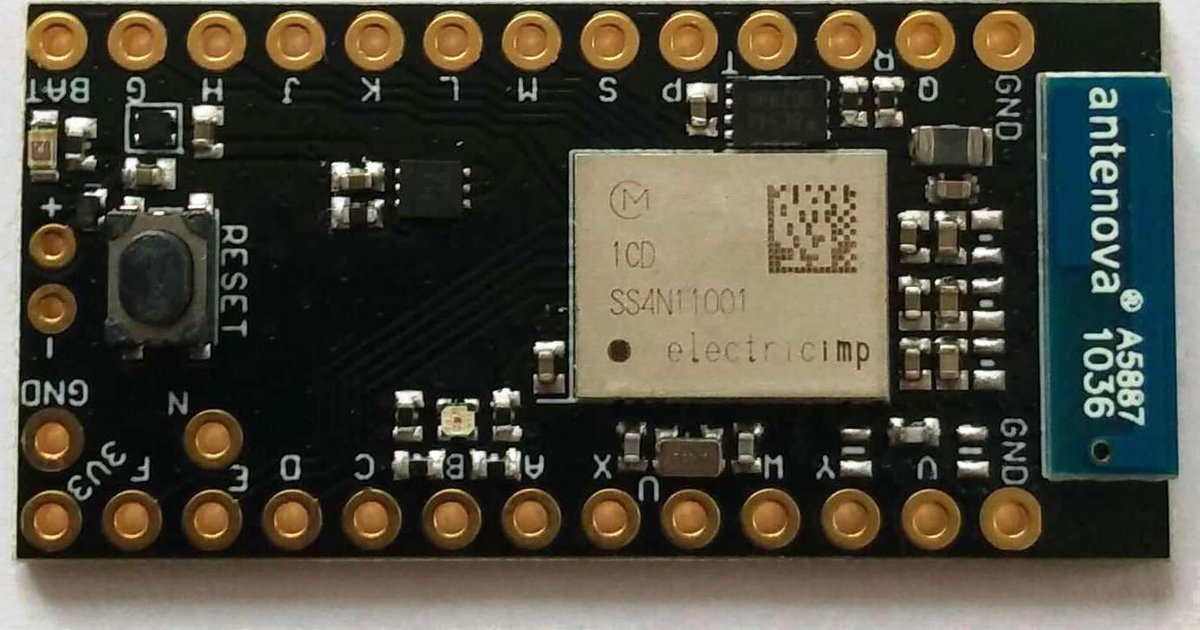 Electric Imp (IMP003) Development Board by Pesky Products on Tindie

Slightly off-topic, but have you used Elecrow for assembly ? Their pricing seems pretty good. My usual assembler charges more just to get started on a batch then they charge for everything when just doing a low volume batch…

Never tried them for assembly, no - always used circuithub for that, which can’t be beaten in terms of convenience

I decided to use this board that Hugo had mentioned.

I just did a proof of concept test and it performed very nicely : )

The board ends up sitting about 1ft away from a variable frequency motor drive and just a little bit away from that is the 3phase motor. works fine! so far so good and this was with the board running off jumper wires.