I have this idea that I would like to throw out and maybe get some others involved. I think it can work, but might not yet be fully practical due to a few technical limitations.

If you don’t understand how an electric pet fence works, you basically bury a loop of wire around the perimeter that you want to keep your pet inside of, and run an RF signal through it. Then the pet wears a collar that emits a tone and then shock if it gets to close to the fence. The buried wire on these setups often gets cut and has to be repaired and is expensive to install.

Here is my idea. Add a GPS unit and an IMP to an existing pet collar. Then, instead of burying wire, you would log onto a website, using a mapping service like Google maps, and draw the fence perimeter on the map around your property. The app would create a zone of coordinates and send them to the collar via the imp. Once there, the GPS would reference the perimeter with the pets location, and activate the collar accordingly.

I can think of at least two technical impediments to making this a practical device:

I am going to start building this device, as I think it is an interesting idea, and I would love to get comments or help if anyone else is interested. I haven’t yet played with any map API’s so I am only assuming that I can do what I’ve suggested.

It’s within 30ft most of the time. But rarely it could be off by 100ft. It’s a normal probability distribution in 3 dimensions. Some of your problems could be solved with a delay. The battery could be smaller. And temporary errors could be averaged. Unfortunately dogs are not trained this way. They need immediate feedback with a specific zone. GPS is almost like the Uncertainty Principal. You can know the exact location thru averaging, or immediate timing roughly, but not both together. To a dog, who doesn’t understand GPS, the tones or shocks would seem random. I wonder if anyone has experimented with a changing boundary that the dog would feel? How do they react over time?

If only we could get GPS resolution down to inches instead of feet. I understand that it isn’t for consumer use for security reasons, but I think that argument is getting old.

I think Amazon provides the answer to this question. This product changes its boundaries sometimes up to 50ft. The ratio of 5 stars to 1 star is normal compared to other Amazon products. People like it! Perhaps more than the dogs… 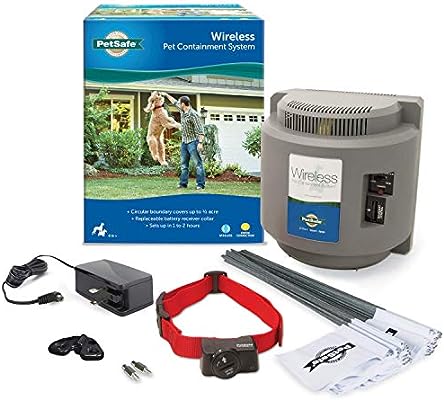 You can get 1-3ft relative accuracy over time thru averaging. It seems nobody needs more than that at low cost. Nor do we need 20ft immediately.

Sure, if you stay in the same place, but that is rarely the case. I use running apps on my iPhone that track your route, and it really annoys me that it wanders back and forth across my path, making the actual distance longer than it should be. In any case, I am going to work on this concept and see what happens. It is mostly a learning experience.

Total odometer distance is easy to solve. Driving a car just multiply by a constant say 98%. Hiking is a different constant. But these 2 stay the same for a given chipset and average speed.

Simpler solution might be just to have a 433MHz transceiver on the collar, and if the collar fails to hear the base station, it would trigger (and the base can also trigger if it stops hearing 433MHz pings).

Ok, so the “boundary” is set by RF propagation, but would be useful in the lost-pet case…