With the holiday season upon us quirky just emailed me about their imp’d “wink” mass-market products (an egg tray, a universal sensor, a personal dashboard weather-station thing and a power strip)

What other mass-market imp’d products are out there to buy now, which are your favourites and why?

In my opinion, it’s too early for picking a favorite.

I think the ideas, concepts, and projects everyone is working on now are way far beyond anything that is now available. Look at the last imp software upgrade. That alone added new features. Also, the agents are getting better and more powerful.

The best thing that can happen is to have a place where everyone uploads their projects (similar to Instructables, but for the imp). This has been discussed, but there are not any agreements on the best venue. The Imp is hardware, software, and cloud. It’s not really an Instructable type project, not really GitHub either. It falls into a place that doesn’t have a venue.

and maybe Hugo should be aware that “www.gotimps.com” is an unused domain name.

Got imps sounds like a fun idea for us “fan boys”

I guess the question is, is it helpful if we “out” products that are shy about their imp-y-ness?

I’m hoping that my Lockitron shows up soon. That would definitely be the best commercial product that I have seen. I hope it is decent, or I might end up making my own.

I’d love to see a list of products with Imps inside, I’d be very happy to support well made Imp products.

ditto. I stumbled upon the Electric Imp when looking for a cheap wifi module for an Arduino. It quickly became obvious that this is much more capable, with better connectivity, at a lower price. It’s a fantastic platform, and the more it moves from dev into commercial products the better. I saw the document recently on “blessing” which really opened my eyes to how this could be used in commercial products.

The four quirky products are available from

Interestingly, I noticed a couple of comments from end-users about a lack of customisability, this is surprising give the products geek-chic and how easy the imp should make tweaking them!

I don’t think you can actually tweak anything, can you? You don’t get access to the Imp at all unless you hack the device. I didn’t actually realize that the Pivot Power was Imp enabled, I just thought it was a bendable power strip.

Hugo is toymail imp powered? was thinking of getting one too. Mainly so my wife can stop using post-its.

Ah now we know where all the audio work was going. 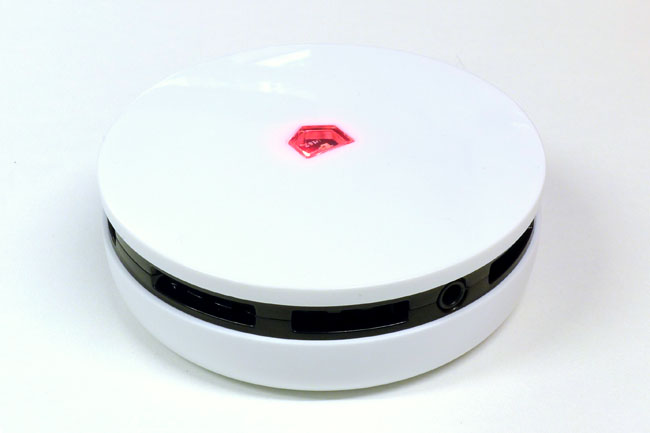 I hadn’t heard about Toymail until reading Hugo’s post, so was bummed when I saw I had missed the Kickstarter by a day. But I went to their site anyway, which allowed an order. To my surprise I just got an e-mail that my order had shipped … pretty neat! Since there’s still no sign of the Lockitron, this will be my first commercial Imp product to try out … interested in the app, blink-up stuff etc.

(After I ship this one off to my grandson, I’ll have to pick one up for myself

Nothing from Lockitron for me, and its been over a month since they charged me.

i hope they are able to get things rolling smoothly soon.

Spotter is cool! But full of bugs. Seems like they’re pushing new squirrel every day or 2 but they deny it. The worst part is that it requires an external adapter to measure Temp, Humidity, or Sound. Because it doesn’t deepsleep. Would be so trivial to change the code to send Temp every hour instead every minute. I bet they don’t fix that for another 6 months? Motion and Light sensors run off batteries and last for years? The motion is fairly sensitive, but I wish it were extremely sensitive. Light is sensitive to off (shadows), but not On. Perfect. Let me know if you’re curious about bugs. It only sends to Smartphone or Email. I like the way we can Log to the IDE, or Xively better.

I wrote code and simple hardware to wake Imp on a pin drop detected by a Microphone. I wish they’d allow us to vary sensitive and deepsleep for audio.

It looks like an ‘inverse Lockitron’ problem at the moment though … no approved app yet to get him online! But Toymail assures it will be soon as they’re obviously rolling out hardware … always very nice to see! Congrats Toymail.

(Just having it here on my desk though at the moment, I hope I can overcome that compelling engineering urge to start disassembly

Hehe, it must be a module since the PT and LEDs are on the feet. I haven’t tried removing a module from a board yet, though I might pull two modules off of the smartmaker breakouts that I have. I wonder if ChipQuick would pull it easily.

Noooo! I still have not got a shipping notification for my toymails

Wow! You design/build/ship the imps … but I got the toy (which I only ordered after I came across your post)! … how’d that happen! I think maybe you gotta have a talk with someone here :). Not exactly sure how I lucked out!

(Still dead in the water though without an approved app … hopefully soon. Was hoping to set this up for my grandson for Christmas after checking it out. Might be close).