This has probably been asked before but my searches are not turning up details.

Sparkfun has some simple dev/proto boards, but they are a little disappointing unless you want a blank slate. Will you offering more of your own boards, e.g. Hannah in the near future? If so, do you have a time frame? I would even be interested in just purchasing the PCB if they are available. I just signed up today, so figure I’m the last on any wait list.

At the moment, we’ve no plans to crank out anymore Hannah boards (aka the kitchen sink) so not sure how helpful it is to be first or last on this non-existent Hannah wait list. That being said, we are small and therefore still flexible so, who knows, if there remains no alternative in the near future, we may decide to do another batch. It’s quite possible that folks like SparkFun, Adafruit, and others will come out with dev boards similar to Hannah. Base on the current SparkFun price for their April-like dev board ($19.95), you may want to brace yourself for the likelihood they may charge significantly more than what we charged for the Hannah ($25).

Thank you for the speedy reply. Like I said, even the PCB is useful, i.e. we just populate the parts of the sink we need. If you would run a few panels, I’m sure you’d sell them quickly (you might throw out a feeler). But given your probable workload, it also might not be worth your while, except, as you say, if there are no decent alternatives are available, folks may be somewhat limited in what applications they come up with. I just thought of something: if one of us runs a panel of your PBCs and re-sells to recoup costs, would that be a problem?

Seeing as this is posted on the wiki I see no problems with using the designs: “They are placed in the public domain - feel free to take what you want and use as you will.”

I have some plans for running a few panels of the Hannah+April (maybe with some mods). I will know more in a week or so.

Not a problem at all! Indeed “They are placed in the public domain - feel free to take what you want and use as you will.” If you find that the information on the dev wiki is insufficient and have questions or need more info, feel free to ask on the forum and we’ll do our best to help.

Thank you folks. BruceS, will you please let me know if you decide to run the panels and if so, how you might decide to distribute them? Thanks!

No problem, I’ll have some idea later this week or next.

Yes I am VERY interested in the Electric Imp Dev kits
http://electricimp.com/developers/devkits.php
These are much more useful than the Sparkfun boards for my needs, and better documented code examples too.
I need two April boards, and two Hannah boards ASAP. at twice the price that you have on your web site. (You should at least break even). If you do not intend to support those boards (Make more!) you should remove them from the web site, they confuse the customer. Call me to discuss, Hugo, if you want. Jon Dutra

From what I see in the schematics, the smaller Sparkfun breakout board -is- an April. It just costs a lot more. If you need an April right away, there you go. Only $6 more than you are already willing to pay. Why wait?

I might just pick up a SF “shield,” anyway, but I think they could have done a lot better for that price. To their credit, they did make it available pretty quickly. Hannah was just ready to go for so much more, IMO.

Unfortunately, looks like SparkFun is out of stock for the breakout board: https://www.sparkfun.com/products/11400. There are currently 54 shields left so get the while you can. I’m sure they’ll restock - hopefully soon!

If you are based in the UK… cool components have the Sparkfun “April” boards £12.99+VAT in stock. I received my two yesterday

thanks–I’m in the US… At this point I’m waiting to see what might turn up on other sites. I expect shouldn’t be long.

Better to buy April Breakout Board from Electric Imp or Sparkfun? Is their a difference? I assume I can still use the invitation that was sent to me originally.

Doesn’t appear the original April boards are available to purchase. Only the $20 board from Sparkfun (which will cost a ton to get shipped to the uk) or the same board from cool components for £12.

Unless someone knows otherwise?

April-like board from Sparkfun is being sold by resellers outside the US: You may want to look at the list of SparkFun distributors:
http://www.sparkfun.com/distributors. Some of the places you can find them are:

There have been tweets from Adafruit too altho no set date yet!

Uninsured shipping from sparkfun is quite cheap (7 euro).

And you can build your own devboard, the only tricky part is the 0.80 euro Atmel ID chip. I bought a couple of those just in case but soldering those dead-bug style works just fine. 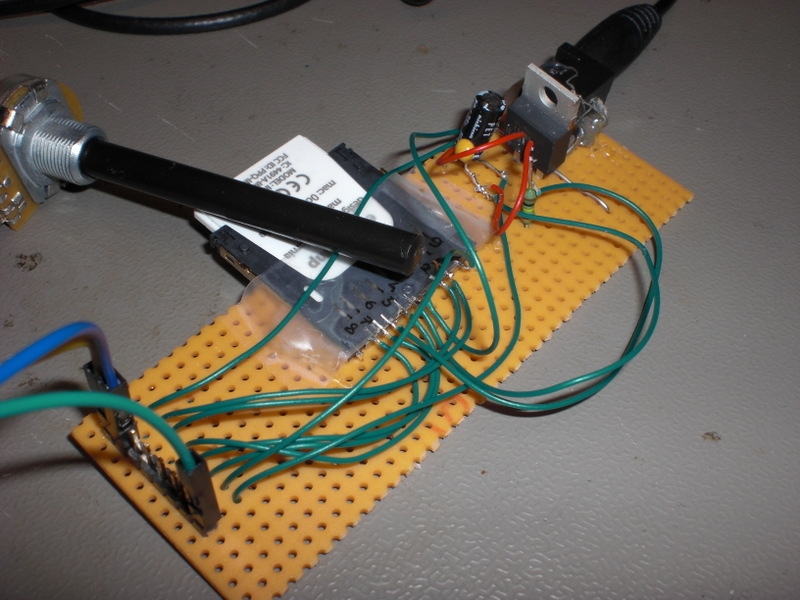 The connectors are form http://www.4uconnector.com/online/index.asp

I would recommend you solder another tantalum cap directly between pins 3 & 4 on the socket, to give better bypass (the inductance of the wires to the LDO output caps basically mean the caps are only being useful to the LDO, not the imp). Ok, so it’s working now but if you had unexplained glitches, it could be lack of local bypass.

You are likely to also see significant noise on the ADCs due to the ground reference floating depending on how much current the imp takes (as the impedance of the ground path will cause a voltage drop on the ground connection).

I’ll do that. The pre-stripped, pre-tinned thin wires are great for prototyping but maybe a bit thin for power. I had planned some more 100nF caps but the 3.3 V power and ID chip do not seem to have any problems. I just realized the imp does not really have much room for internal bypass caps so it needs those even if the rest of the application doesn’t.

I guess I am a little late to the party. If you are looking for reasons to run another batch of Hannah boards put me down!